For the last years I've been using PhpStorm, but since August 2019 I jumped into the Visual Studio Code world. Mostly because of the awesome Synthwave'84 theme Robb Owen baked for all of us that love 80's aesthetics. I installed a bunch of plugins to work with Laravel and Vue. It's not as awesome as PHPStorm suggesting imports or moving between classes with a click, but I also want some challenging when navigating through the code. It helps me thinking twice about where to write the next function.

As I did with PHPStorm, I usually hide every UI section to focus on the code. I do everything with shortcuts. 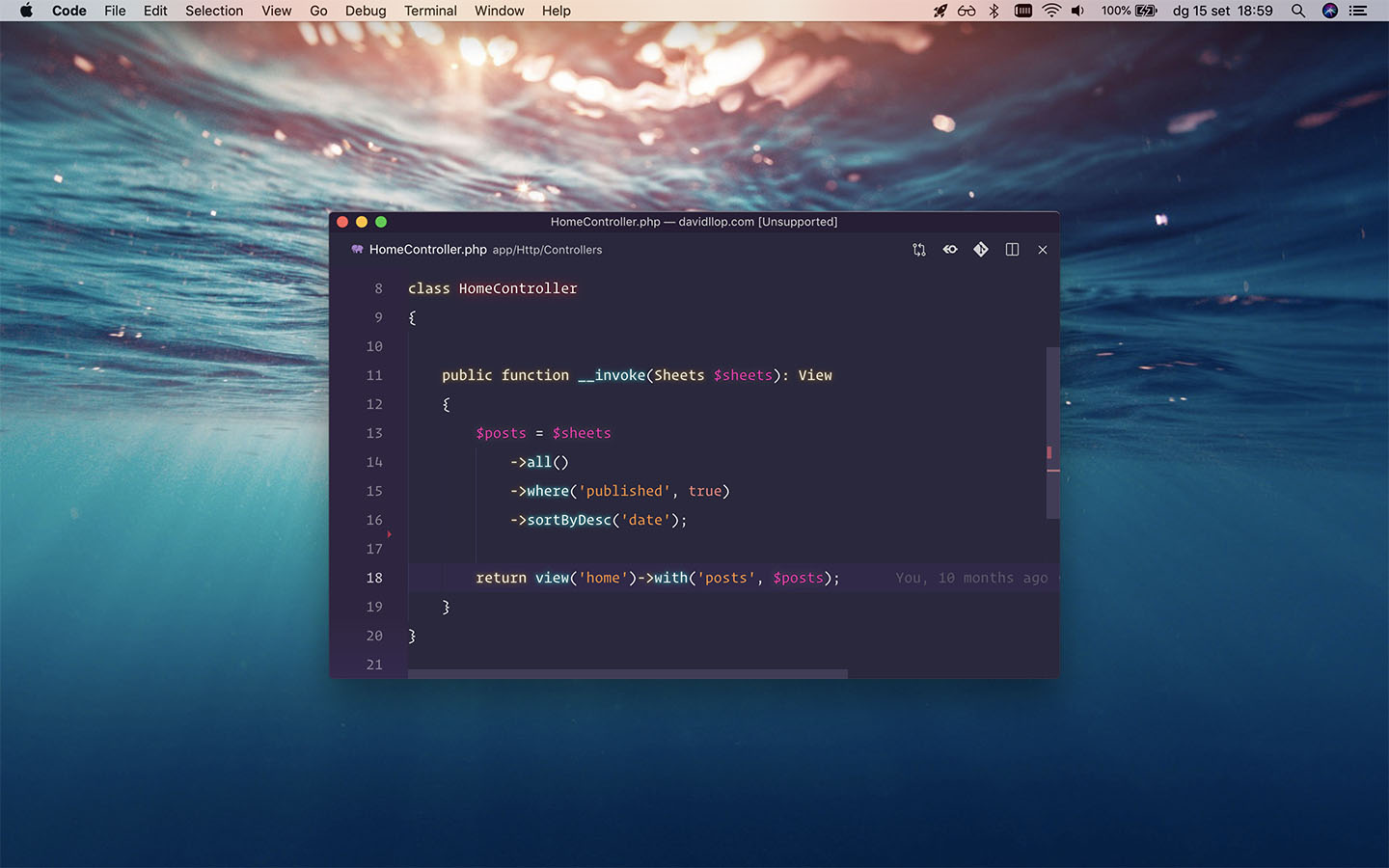 Currently I'm using Synthwave'84. I've always used dark color schemes and I chosed this one because of it's Retrowave feeling.

Since I moved from Windows back in the day I missed some way to arrange the windows on the screen. I'm using Spectacle. It works with keyboard shortcuts instead of moving windows to the edge. I always modify the keystrokes for the four corners to match cmd+opt+ctrl+[1,2,3,4].

I use Safari as my personal browser because of all the features it has regarding syncing with the iPhone. I also like to check the websites I made with it since I think that currently it's the "less standard" browser out there. For develop purposes I prefer Google Chrome for request inspection and console tasks.

I use Valet for local development. Previously I've used Homestead with great results, but now I'm focusing on newer sites without backwards compatibility, so I'm fine with just one version of PHP installed in my machine.

Sequel Pro. That's it. It's the best MySQL manager out there for free, it's open source and currently maintained.

Currently I'm using the MacOSX Terminal App. Since the update to Catalina, now MacOSX works with zsh by default, so I installed Oh My ZSH with the robbyrussell theme.

When I have to write something I chose MacDown. It's easy to use and can see a live preview of the result. For writing emojis I use Rocket.

For Email, Calendar, Reminders and Notes I use the Apple's default apps.

For music I use Spotify and honestly I can't live without it. Recently I've also been visiting Poolside FM as it's really cool.

I own a Macbook Pro 13" with TouchBar 2017 and I'm very happy with it. The keyboard feels weird at first but I got used to it and can't use the previous version anymore. I've suffered a few times the keys issue, getting a free repair from Apple. 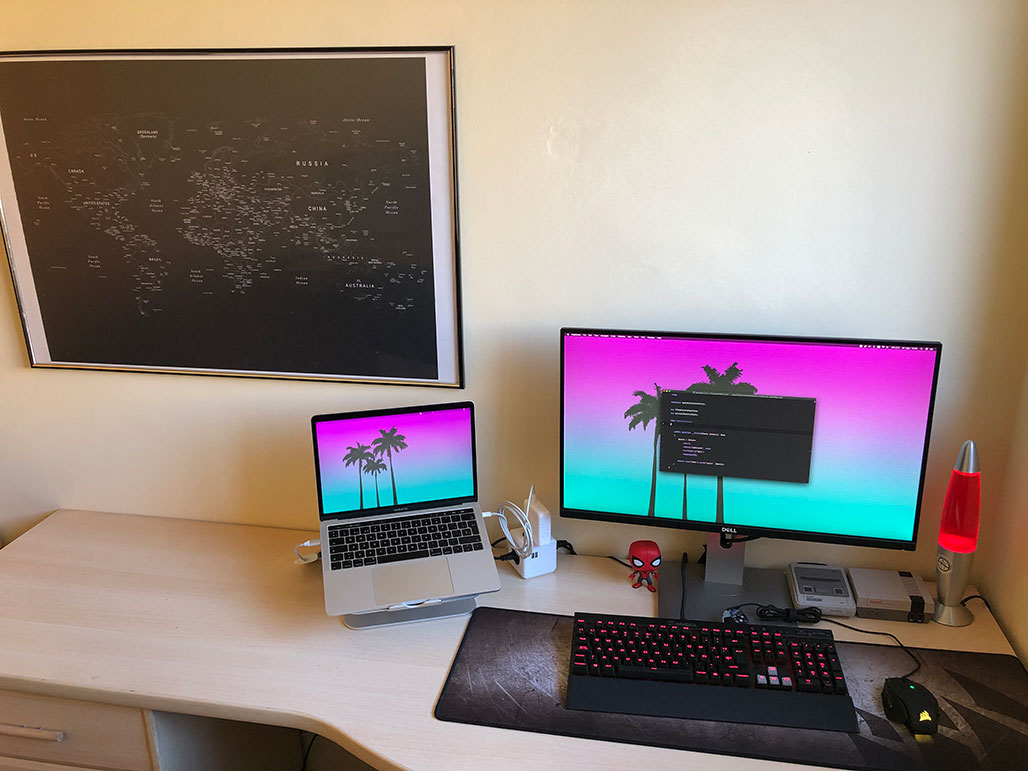 At home I have a Dell UltraSharp U2715H monitor for work (MacBook) and Gaming (Windows, SNES Mini, NES Mini and PlayStation Classic).

I use this Laptop Stand Bestand to put my Macbook side by side with the monitor and have two screens.

My headphones are Sennheiser HD50. They're no longer in production but mine still holds the day. The audio is awesome and I have them for almost 15 years now. They were pretty cheap for the good quality. For work I'm currently using Xiaomi Mi Headphones Comfort (can't find the link in english). They were pretty cheap and the sound is awesome. Also they have a good ambient noise reduction which is pretty helpful at the office.

I point with a Corsair M65 Pro mouse. The back / forward buttons on the side doesn't work with the MacOSX and I haven't found any solution for this, but it's not really bothering me. The mouse feeling is awesome and I also use it when gaming on Windows.

Under the keyboard and the mouse I have a Corsair MM 300 Extended Mouse Pad. I bought it in an offer along with the mouse and the keyboard but didn't regret it. The feel is so premium and it has boat sails on it!

Desktop table is nothing important by now. It was here when we moved in and can't get rid of it.

My chair is Järvfjället from IKEA (Yes, I had to copy the name from the website). It's the best chair I've ever tried and can't be happier with it. I just hope someday I would have the same at work 🤞.

I have a lava lamp on the corner. Can't remember where I bought it but it's just awesome to have it there while coding.

Got any hints?
No, I'm afraid not.
However if you search within yourself, then...
Cut it out, ok?
I asked for a hint not the crazy philosophies of a Father Christmas look-a-like.
Heed my words, bold adventurer, and your path will lead to wisdom and..
There's just no reasoning with him...
I'm totally stuck as what to do.
I really wish I could help you but I'm just a clueless old fool.
Never a truer word was spoken.
Still clueless?
I'm afraid so.
Still look like a Father Christmas?
I'm afraid so.
Good.